This year, I attended Nerdtacular in person, and the NSFW show at DragonCon via live stream.
These events had audience voting in the form of sound. I remembered when I was a kid, on TV they would often put a camera on a VU (Volume Unit) meter to show just how loud the audience was.

I think they quit doing that for a number of reasons:


But some sort of SPL (Sound Pressure Level) meter would still be handy for these events.
I've also been looking for a project to learn more about Arduino.
So I sketched out the initial design for The Conference Panel.
If the project works, it would be used at these conferences to simplify some of the show mechanics.

I'm treating this like a software project. I want to create a Minimal Viable Product at each stage and iterate over the design.

Physically, I think the final project will be built on a gatorboard back and interior panel with a plexiglass front and a corrugated plastic perimeter. There will be a base where a "ribbon board" display could eventually be attached to the front and which would serve as storage for the cables and buttons.

There are a number of unknown factors that need to be defined for this project to work:

I picked up a strand of Adafruit's Diffused Flat Digital RGB LED Pixels. There are 25 bright "pixels" per strand which are individually addressable via a simple serial protocol.

Then I created a layout that would place the 25 pixels on a big "dial" without cutting the strand. 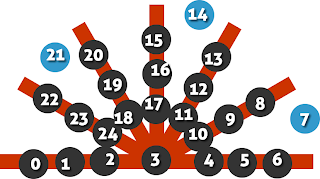 The blue "pixels" aren't used in the display. But by leaving them connected, I don't need to cut and solder my strand.
To test this layout in the real world, I just eyeballed the layout and taped the strand to a box.

So far, so good!
In Part 2, I'll work on the mechanics of the light and try techniques for creating a clearer display.