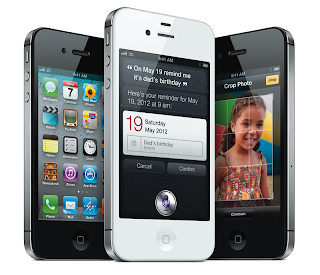 I've been packing an iPhone 3G since it was introduced.
At the time, it was new and cool.
Native apps, faster data network, and microphone inputs. It was an amazing phone and portable computer.

Apple's apps, like Maps, became useless. The phone became so slow that was not able to perform most tasks.
Since I pretty do everything on the web, I was still able to use the phone.

But last week I updated to the iPhone 4S and everything is great.
Well... Mostly Great.

First off: the 4S is fast. Obviously faster than the 3G, but also appears to generally be faster than the dual-core Android phones I played with.
HSPA+ is actually faster than stock 3G. It's not 4G, but it is noticeably faster for web surfing and maps.
Colloquy benefits from the additional speed and irc is very pleasant on the new phone.

The display is crisp and very readable.

Multi-tasking actually works. I can be streaming TWiT or Frogpants and still participate in the chat room.

I don't use iCloud. I use Google as my "cloud" service.
I don't use Mail. I access my mail using the GMail mobile web interface.

And now to the stupid problems:
Siri.
Siri works. Really.
"Remind me to leave at 3:00"
Poof! Reminder set.
But...
If the Reminders app isn't running, the alert doesn't happen.
Almost missed the bus today because of that.
Siri really should turn on the Reminders app if it's requested to set a Reminder.

Phone.
Yes, the Phone app.
The Phone app does cool audio processing like monitoring a second microphone to cancel background noise on your call.
But if you plug in headphones, it gets all confused.
It starts to amplify the background noise until it drowns out the call and eventually starts a feedback look which makes conversation impossible.
Lots of discussion on the Apple support forums, but no acknowledgement of the problem from Apple.