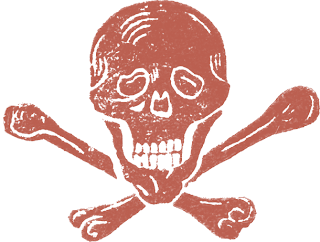 A recent episode of This Week in Media had a terrific discussion on Piracy.
Let me steal a few of those ideas and mix in some of my own.

When a product is reproduced without permission of the holder of the design rights, that product is said to be "counterfeited" or "pirated." In the digital world, the verb "pirate" means to distribute a digital copy of a rights-protected work.

It's a silly term.

I much prefer "unauthorized duplication" or "copyright infringement."

But the rights holders call it "piracy" so I'll use that term for this article.

Why does online piracy even exist?
I suggest three reasons:

Selfishness.
I know some people who engage in unauthorized duplication of rights-protected works because they just don't want to pay for it. This has been true since we had mechanisms for copying media. Software "pirates" would duplicate and distribute floppy disks. Others copied VHS tapes. Still others photocopied articles.

Generosity.
You get this cool thing you want to share with your friends. Remember GIFs of Playboy centerfolds? A lot of things in this category involved some effort on the person transforming the work into a distributable format: removing the copy-protection from a game, scanning the picture, digitizing the video. This sort of "social sharing" was a big issue for the music industry.

Convenience/Availability.
Often, the file sharing communities will have a better selection of content than the legitimate services. And pirated content is usually easier to get and use than the authorized product.

The music industry's response to sharing was to sue their customers and anyone who enabled the unauthorized distribution of music. This did not help. It just introduced another reason for people to pirate: "sticking it to the Man." The industry was rapidly heading to a state where sales of individual songs or albums would be nearly impossible. It wasn't until Apple made the process of buying music more convenient than pirating that the situation turned around. Now, after years of kicking and screaming, most labels even release their product without Digital Rights Management. And music is now an tiny portion of peer-to-peer titles.

Today, pirated video content is much more attractive and convenient than authorized versions. The one exception being NetFlix - but I'll come back to that later.

The pirates have established standards for file formats to ensure that most files will play on most devices.

Upside? Fairly easy and getting easier every day. Free - if you don't mind screwing content creators.

Downside? You aren't supporting the creators of the works. You may be prosecuted for piracy. Because of the "cloud" nature of the download network, download speeds are not consistent.

Fully Legal Commercial Download:
Upside? There's someone to call if it doesn't work. Part of your payment is going to the rights-holder.

Right now, video producers (especially Television) place a value on their product that is out-of-whack with the audience. If the average couch potato watches 143 hours of TV a month, and the networks think each show is worth at least $2, then we should be paying $286- per month for our content.
So $200/month is a bargain! Why are we complaining?

What the People Want: Netflix

Netflix uses DRM (a type of copy protection) but no one complains. Because it runs on almost every platform and charges a fair price. Compared to our legal digital video "stores," it is the essence of simplicity:

Much like when Apple made legal downloads better than piracy, Netflix makes streaming video better than bittorrent.
And while the studios and networks are worried about Apple "doing to video what it did to music" (Save it?), Netflix has come in and done exactly that. It has created a business model that consumers like.

Video distributors are selling reflections. They create a product and then sell us the right to look at it. Pretty darned ephemeral, and the consumers know it. Most television viewing is "wallpaper." We're not actually paying attention to the screen for 143 hours a month. People just aren't going to pay for that content when given a choice. And the new model, the non-cable model, is all about choice and value.
The consumer options aren't between Cable, Hulu, or Network web sites. It's between FREE with great selection, $8/month and watchable selection, or $120/month with release windows and limited selection.

Personally, I spend around $30 a month on television. One streaming service and one new DVD set supplemented with over-the-air and free streaming gives me more content than I have time to watch.

Content producers must know they're going to lose the cable subscriber fees. Period. That is a business model that arose from an economic anomaly and cannot be sustained.
I think it's clear that we will watch streams of filler and buy the stuff we really like directly from the producers. In a model like that, there's no business for networks or cable companies.

TV and Movie industries seem to think they can delay the inevitable by abusing the legal system and by buying off lawmakers. They won't change the business model. And the reason they delay isn't to help the business transition or increase value for shareholders. It's just to let current execs continue to collect a paycheck until they retire and it becomes someone else's problem.

Piracy is bad.
It prevents us from rewarding the creators of the content we want.
Cable is bad.
It prevents us from NOT paying for stuff we don't want.
Television Networks need to provide an experience that is better than the pirate experience. They cannot do so as long as they remain addicted to the easy money of Cable Subscriber Fees.
Until content producers break the cycle, I think we're going to see a general decline in the quality of video content and an increase in the retail price of that content.
Prepare for the Leaden Age of Television folks!
Posted by Unknown at 10:07 AM