How to Answer the Smart Phone When It's 9 Below

If you're someone who spends time outdoors in Minnesota, then you know that "cold" doesn't really start until you're below zero Fahrenheit.

In really cold weather, I wear glove liners and mittens. Most of time, I wear light insulated gloves so my hands don't get too sweaty. The Columbia Mens City Trek Glove, Breen, Medium

have nice grippy palms for handrails and stop the wind.  Great while walking, but a bit chilly if standing around.

If my iPhone rings, and I'm not wearing a headset, I need to pull off my gloves or mittens to "swipe" and answer the call.   That's fine unless the windchill is in the negatives.

A number of podcasts carried the press release for the Digits touch pins. I ordered mine, and can now report. 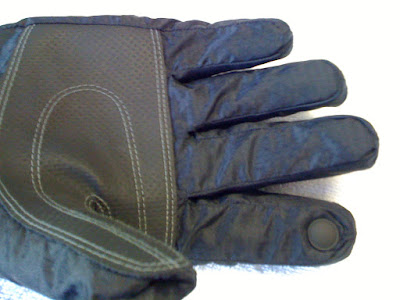 They work exactly as advertised. The simple two-part mechanism puts a metal pad against your finger, and a conductive silicon pad against the screen. Getting the pin placed properly can be a little tricky, but isn't really very hard. The pad screws on instead of just snapping, so it should really stay in place.

I put the pad in place, and I can operate my phone just fine with my gloves on. The temperature is dropping today, so I'll get to see this evening if the pin conducts heat as well as electricity. I'll update in the morning with the field report.

*UPDATE*
In sub-zero conditions, the metal pad felt cool, but certainly not cold.  The pins work great on nylon gloves, fleece mittens (put it on the thumb) and even lightweight knit gloves. I wouldn't poke a hole in nice leather gloves, but then again, I wouldn't wear leather dress gloves in the bitter cold.

I was a little concerned about snagging the pin on handles or railings, but in my public transport travels the last two days, that has not been an issue.

A simple and clever solution to a common problem.
Posted by Unknown at 10:34 PM