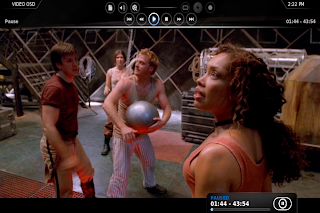 The ultra-cheap Home Theater PC made it almost a year before it died.

It's being replaced with slightly more expensive version based on things I learned from the old one.

The Phenom II can be had for about $100.
An all-around excellent computing bargain.

The basic choices are on-board video, and a separate video card.

Pairing a less expensive board with a card designed for video works very well, but is slightly more expensive than the integrated boards based on the AMD 785G chipset. The reviews of the 785G are universally positive.

All the advanced features of the video system won't be used by current software, but should be viable for years to come.

So the video card will be 785G integrated video.

Choosing the 785G limits our choices for motherboards.

Tom's Hardware did a nice review of the Asus M4A785TD-V EVO board and that was good enough for me. If I build another one of these, I'd go with the micro-ATX version, but since I'm planning on a custom enclosure, I saved a few bucks by purchasing the full-sized ATX version.

This made a huge difference. I had already purchased an Antec EarthWatt 450 for the old box, but that computer died before I got it installed. The new machine is drastically more quiet than the old one. Not quite silent, but very quiet.

I put a one terabyte SATA drive in to start. I plan to add two 1.5 drives to make it into my main household file server.

I kept all the other parts (Case, remote control, DVD drive,  etc.) from the old machine.

Assembly was very straightforward. The Asus board came with some nice headers so I could plug in all those little case wires into the headers and then plug that into the board. Made it very simple.

The only issue I had was that I had 2 ATA hard drives, an IDE CD drive, and the IDE DVD drive. The new motherboard only had 2 IDE connectors, so I decided to skip the old hard drives and put everything on the ATA drive. There are a ton of SATA and eSATA connectors. Again, this board should serve me for a long time.

The Price:
With some shopping around, I was able to get all the parts for around $450 including memory.

In part 2, I'll install the software.