In our previous installment,  the software installation went pretty smoothly.

I'm able to watch my videos, listen to music, and even watch Flash video on the web.
A few problems remain:

Time to make this puppy sing.

I use it on all of my computers.

It's really nice for the media center since trying to install software or edit settings while sitting on the couch can be a problem with the screen so far away.

Issue: Screen and mouse are visible, but actions from clicks don't show up in my vnc client.

Cause: It turns out that the stuff that makes Karmic Koala so pretty is all the screen effects provided by something called Compiz. There's a known bug with Compiz and the ATI drivers used on this computer. Since this box is used almost exclusively for video anyway, we can turn off those pretty, pretty special effects. 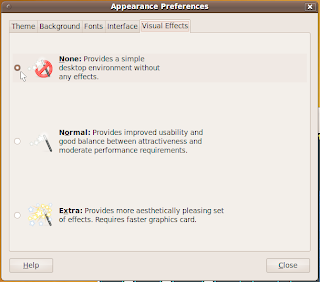 Set the effect to None and close the window.

If you'd like to easily switch these effects on and off, there's a nice little button you can install in the menu bar.

Issue: DVDs are not being recognized by XBMC.
Solution: back to Synaptic (System:Administration:Synaptic Package Manager) and install udf and libudf0. UDF is the file system used on DVDs.
Some DVD still are having issues ("Kill Bill" for example), but the TV shows I tried are working.

When I get the extra drives, I'll probably rip the rest of my TV-on-DVD shows because the experience of watching the files is much richer than watching the DVD. (Better transport controls, show notes, bookmarks, etc.)

Don't know why, but switching my selected audio output device from "Analog Headphones" to "Analog Output" solved the issue.

Problem 4: Video Tearing
I tried the various vertical sync and refresh option in XBMC, but many of those would cause XBMC to hang when not actually playing video.


Solution:
The ATI Catalyst Control Center was hiding under the Applications:Other menu.
Setting the Wait for vertical refresh to Always On completely eliminated the tearing on moving video. 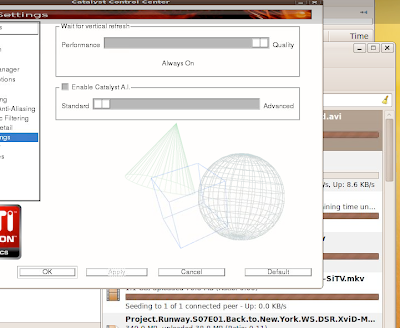 Adding New Services:
Podcasts (For listening/viewing in XBMC):
The built-in Rhythmbox Music Player can retrieve podcasts, but it just didn't work well for me.
There are some dedicated scripts to fetch podcasts, but I'm looking for a simpler solution.
The Banshee player did a much better job of managing podcasts. It is easily installed from the Ubuntu Software Center (Applications:Ubuntu Software Center).

Streaming Radio:
The built-in Rhythmbox Music Player streams radio just fine. Many of the presets didn't work so I just deleted them.
The Banshee Media Player also does a fine job of streaming radio.

Streaming TV:
The page on the XBMC wiki explains how to add both video and audio streaming to XBMC.
Now I have my favorite audio and video streams playing directly in XBMC so I can use the remote control.
There are no solutions available to play paid (Netflix, Amazon, Vudu) streams on linux.

I'll present a list of my current streams and podcasts in upcoming article.