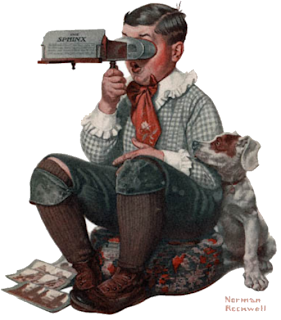 The 2010 Consumer Electronics Show was all about "3D" Televisions for the home.
Let's be clear: There's nothing "3D" about these displays. They are stereoscopic.
Much as stereoscopes completely replaced traditional albums of photographs in the 1850's... oh wait.
Here in the twenty-first century, most people still keep albums of traditional photographs.
Could stereoscopic photography be anything more than a fad?
Perhaps a little more...
I loved my ViewMaster back in the 1970's and in the 1980's one could purchase stereoscopic film cameras.
In 2010, we'll see a bunch of stereoscopic digital cameras.
But here's why the home stereoscopic TV fad will be particularly short lived:
Did you really love "Avatar" enough to plunk down another two grand for a new TV, buy a new "3D" Blu-ray player, and sit perfectly upright wearing dorky glasses just so you can watch it at home?
But Gaming is whole other issue.
Gamers are used to strapping on a headset, so adding the glasses would not be a big deal.
We're used to sitting perfectly centered in front of a screen for hours at a time. I think stereoscopic monitors for gaming could become standard gear.
But I think you get a much more compelling 3D experience with something like this head-tracking demo.
Technorati Tags: 3D, television, CES
Posted by Unknown at 4:19 PM