But I also believe that advertising is one of the ways content producers will get paid. So what does advertising look like in a world where traditional metrics don't exist?

Who doesn't get it?
First, a little bomb-throwing: Current advertising metrics are a big lie. Traditional TV and Radio advertising gets your message in front of millions of people. But the metrics used in the decisions to run these ads are just bad science. I'm a big proponent of TV and Radio. I just think that the pricing model has no relation to ROI.
Similar metrics are being used to decide the fate of your favorite TV shows.

Who can't sell it?
If there's anyone who DOESN'T know how to sell ads in a new model, it's the TV sales force.

This can be demonstrated by recent comments in two different podcasts.

Leo Laporte, the man behind This Week in Tech, implied that he get paid a much higher CPM (Cost per Thousand) for his ads than even primetime broadcast television.

The hosts of Buzz Out Loud were recently taunting their sales team because they had no sponsors. Right after they celebrated their 1000th episode.

So what's the difference?
This Week in Tech is a very small organization. It's basically just Leo and a few staff. Very "internet startup."
Buzz Out Loud is a c|net production. Owned by CBS.
Obviously, I'm not privy to the details of their sales system, but it seems ridiculous that CBS can't leverage any of their advertisers into Buzz Out Loud.
In fact, if you look at the online programming being produced by c|net, you'll rarely see a sponsor - most of the ads are for other cnet programs.


Traditional Commercials
If we could get past the Union agreements and music license problems, we could put traditional commercials in peer-to-peer or cloud distributed programs. One of my favorite shows, Make: Television is available via bittorrent. It has a traditional sponsor: Best Buy's Geek Squad.

Integrated Sponsorships
This has to be the largest category for shows designed for online distribution. Most podcasts have sponsorship messages presented by the show hosts.
These are lust like a commercial radio sponsorship messages. Because it's integrated into the show, it's not likely to be skipped with the fast-forward button. If the host does her job right, the audience doesn't mind the commercial message.

Product Placement
Scripted programs can effectively use Product Placement in lieu of traditional commercials.
This has amazing implications for the non-broadcast shows.
I watch most of my TV on DVD nowadays. I rarely see commercials. But I see product placements every night.

Last season, we witnessed true genius in product placement with TNT's Trust Me. The show takes place in a fictional Chicago-based advertising agency. But the campaigns the agency works on are for real products. The viewer is exposed to multiple campaigns and extended discussions of these products. When it comes out on DVD it will still be brilliant advertising without the commercials.

Destination Advertising
We already see this with Superbowl ads. Something like one-half of the viewers are there for the commercials.

The elusive "viral" video or website is the holy grail of Destination Advertising. 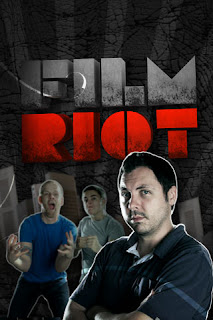 Revision3's Film Riot is another program freely distributed with commercials. (Revision3 no longer maintains it's it's own bittorrent trackers, but their servers have plenty of bandwidth for direct download.)

Film Riot is about making movies. In most episodes, they will show a scene then talk about what went into making that scene.

But what makes Film Riot interesting from an advertising point-of-view is that most of their advertisers have the Film Riot crew create the ads.

We end up with truly creative stuff that doesn't completely support the brand message, but is always fun.

Squarespace features the ads on their blog.


So it's possible to advertise in an online world. Now how do we get the ad agencies and potential advertisers on board?


"As Seen on TV" image courtesy of Mathew Burpee
Posted by Unknown at 6:30 PM