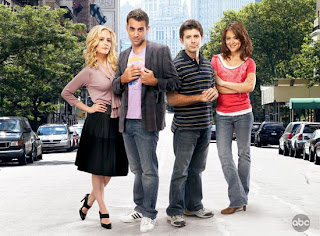 Rob Thomas (Creator of "Veronica Mars," "Cupid") has two new shows out. "Party Down," and a new version of "Cupid."

Now, I'm a huge fan of the original "Cupid." I still watch it on blurry MPEG-1 captures of multi-generation VHS tapes.

This new "Cupid" is not a sequel or spin-off; it's a retelling of the original story.
And there's a lot to like in this new version.

It's an hour program this time. That gives a bit more room to explore the Trevor and Claire characters while keeping the Couple of the Week format.

The bar environment is much richer. Physically, it's larger and with an actual stage for performances. The bar staff is still related to Trevor's housing, but instead of rooming with Champ, it seems that Trevor rents from the bar owners.

Like the original, the new "Cupid" is filled with music. This can be a double-edged sword since I'm pretty sure music licensing is what keeps the original show from appearing on DVD.

Cupid's personal story is the same as the original (at least so far.) I loved that the show never answered the question of whether Trevor was insane or actually a god.

But the casting of the principals falls far short of the original.
Bobby Cannavale is a truly fun actor. But his portrayal of Cupid lacks Jeremy Piven's libidinous glee. His earthiness comes off more as blue-collar. Cannavale just doesn't seem as crazy. And in a show where the premise is "this guy might be crazy," that seems important.

Sarah Paulson's Claire just didn't work for me at all. I know she's supposed to maintain a professional distance from those she's helping, but she's also a published author. Passionate about her belief that true love is possible and that infatuation hinders the quest for true love.
The words were there, but I just never bought it. I don't know if it's the character's "look," or the acting or the direction. Somehow, I just didn't feel like there was an emotional being there.

I'm not saying this isn't a darned charming show. It just lacks a bit of sizzle of the original, and it's being launched in an environment with lots of other Moonlighting-esque shows.
Perhaps this is the right time for a slightly safer version of Cupid. But after Desperate Housewives, Mad Men, and Sex and the City it seems like a good environment for an edgier version.


Technorati Tags: Cupid, Review
Posted by Unknown at 11:30 AM