A Media Center in the Living Room: Part 4 "DVD"

A quick update on yesterday's troubles:

The bulk of my "TV" watching has been TV-on-DVD. I get good programming without the big Cable bill.

Up to now, all the DVD content for the media center was ripped to the hard drive using Handbrake on the Mac. A Folder Action watches for the compressed files and moves them to the media center.
While I (and presumably most media consumers) consider this a Fair Use, it violates the "anti-circumvention" provisions of the Digital Millennium Copyright Act ("DMCA").
So you're breaking the law if you copy a DVD program to your computer.
Silly? Yes.
But then again, our current copyright and patent system is so broken and corrupt...
I'll save the complete rant for later. Back to the project!

There's a number of DVDs that I don't want to add to the library. I want a way to watch those using the computer like a normal DVD player. Heck, I've got the remote!

So in goes the LiteOn DVD drive I purchased at General Nanosystems. (Raising the build total by another $22.)

But since this box is running mostly Open Source software, there's no way to legally decode the copy-protection used on most commercial DVDs.
So once again, we're going to have to defy our friend, the DMCA in order to use a product we already paid for.

Fortunately for those willing to ignore the DMCA, there are people outside the jurisdiction of the United States willing to provide the needed tools.
Of course, if the maintainers of Ubuntu provided you with these tools, they'd be in legal trouble. So they don't directly include them. We're going to have to leave the comfort of the GUI to make the DVD drive work, but it's all just cut-and-paste into the Terminal window.

I just followed the instructions at http://www.debuntu.org/how-to-play-dvd-under-ubuntu-linux.
Afterwards, XBMC was able to play a DVD complete with menus.
Here's a screenshot showing the MediaStream transport controls. 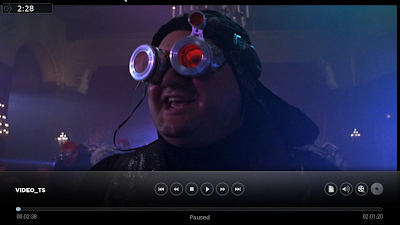 Mystery Men (c) Universal Studios 1999
Total cost of upgrades so far:
A bit more than the "zero dollars" I had intended, but still affordable.