Seems everyone (well, everyone on Twitter) thinks Twitter will bust out into the mainstream in 2009.
I'll go on record as being in the skeptical camp.
Mr. Tweet points out that CNN and other mainstream media outlets mention Twitter all the time. But remember, these lemmings also created Second Life bureaus. Twitter is a terrific micro-blogging platform. And perfect for news distribution. Almost as perfect as RSS...

Another factor people point out is the explosive growth of Twitter.
Let's put this in perspective. Twitter JUST passed the World of Warcraft fan site, wowhead in January. Popular, but hardly "mainstream." 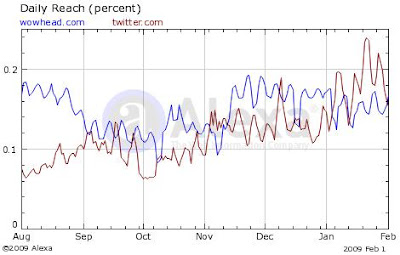 Link to traffic graph at Alexa
Twitter is a cool infrastructure. I'm personally working on a number of projects built on it. But I don't see it breaking out in its current form.

Twitter is organized around individuals, not topics. This allows for the IM-style conversations that go on, but it makes it really hard to find information.

Twitter's "killer app" at the moment is link-sharing. I think there's a model focusing on this where they can by very successful.

Last I checked, your Grandma wasn't twittering on her smart phone. Unless you're web browsing on your phone (and that's painful on anything besides an iPhone), you don't need the link sharing.

As mentioned in a previous article, I just don't see Twitter's future in its current form.