My Own Worst Enemy got the jump on the whole double-life thing, and Dollhouse is debuting in the death zone of Friday night. Not a good situation.
The ratings reflect this. But the fans came out and put the show to #1 on iTunes.
Fox is getting some of this online stuff right: You can watch the show on Hulu.com and they've set up an official fan site.


But, sadly, I found the debut surprisingly week. 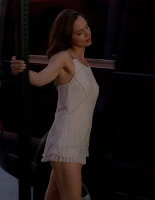 The dress.... THE DRESS! Dang... no official online images of that dangerously-short dress.

The Dollhouse set is clean and creative.

So what's not to like?
I think they just tried to do too much in a one-hour episode.

The brief touch with Caroline (who becomes Echo) was completely wasted. It just barely hints as to her motivations and history. Tell us more of Echo's back story after we get to know her.

FBI guy on the trail of the Dollhouse? Who cares? Kick-boxing sequence to show his stubbornness? Yawn. Show us when his story overlaps.

The second engagement was terrific. Good dialog. Interesting twists. You care about the characters.

Alpha? I can understand introducing him in the debut, but I think it was a mistake to introduce both Alpha and the FBI guy. Just touch on one and leave something for later.

These extra plot lines will surely be important as the show develops, but it felt to me like the production team was unwilling to fully to commit to each engagement and let those stand on their own as mini-episodes.

I watched it again to see if I was just missing something...
It's missing the hallmark Whedon humor, and this particular episode feels a bit "forced."

But at the end, I found I just didn't care about Echo.
I'm intellectually curious, sure.
But I don't feel any emotional attachment to any of the characters except the handler, Boyd.

I hear the show starts to come together after a few episodes.
Still better than most of the crap on TV. But then again, I quit watching most TV just because it's so bad.

I hope this debut episode is just a bump on the road to what promises be a clever and intriguing show.