There are some great games out for the iPhone/iPod Touch. The one that has consumed the most time for me has been Tap Defense.
This is a nice implementation of a "Tower Defense" game.
In this type of game, the enemy moves along a set path and you use your resources to build offensive towers to destroy them before they get to the other end of the path.

In Tap Defense, the units are the residents of Hell attempting to get to Heaven.
You have a number of units available to you, but I won't go into the details here. I assume you've already played the game and are looking for a strategy.

Things to Avoid
Kill Zones: It seems like you would want to bunch your towers up and create "kill zones" that would prevent anything from getting through. This works on many levels, but on levels where there's particularly sturdy opponents, your towers will concentrate on the ignore everything behind it. This can result in wave of units pushing past your defense.

Over-building: Each enemy unit is generally worth only a few gold. If you spend more gold on a level than you earn, you will run out of resources and be unable to build or upgrade towers at later levels.

Upgrades: In my winning games, I only upgraded one tower before level 20.

The Plan:
The most important thing the difficult mode of the game is money. We must do anything we can to save money and earn more money.

Level 3:
3 more towers
If you lose more than one life during the first three levels, just start over. 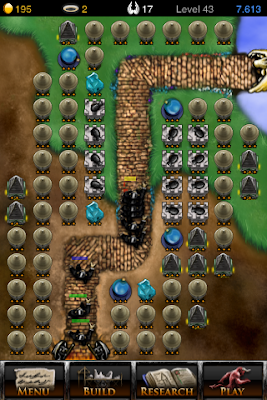