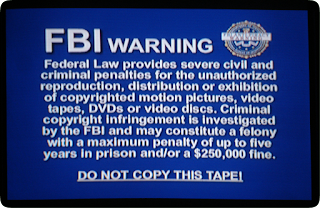 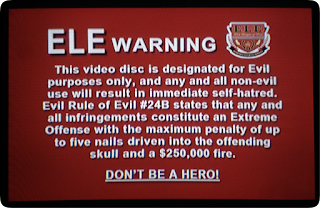 There will be spoilers.
You have been warned...

Then oddness begins as soon as you put in the DVD. What appears to be a slightly dated FBI warning falls apart show the REAL warning: The Evil League of Evil will enforce rule #24B

The DVD itself is a region-free DVD-R.
Played fine on the multiple DVD players and computers I've tried it on.

Menus are clean with a snappy 3D transition.


The show is there in all its glory, of course, but you've already bought it on iTunes... right?

So, many people will be buying the DVD for the extras, and they are worth the price.

Evil League of Evil Applications
10 ELE applications were chosen for inclusion on the DVD. Most are pretty good, but some of my favorites didn't make the cut.
I was glad to see Tur-Mohel on the list.
Somehow, The Enabler, didn't make it on to the DVD.
The winner: Lord Stabbington.
All the competitors are listed on the DVD. (Takes quite a while to scroll through them.)

The Making of Dr. Horrible
There are three Making Of featurettes:
The Movie
The Music
What Just Happened?

There's the "normal" commentary track. Good stuff for the fans.

The Writer's Guild, the dreams of chorus members, The Guild, how Nate is better than Neil, the lack of Asians on TV, Ninja Ropes, movie commentaries... well, pretty much anything except the show.

Fans of Simon Helberg ("Moist," "Howard Wolowitz" in The Big Bang Theory) will be pleased to know he gets his own song: Nobody Wants to Be Moist.

"Megan/spidra" over on MySpace is transcribing the songs.

My favorite song so far is (I'm) Better Than Neil. Sung by Nathan Fillion. Here's a taste:

Hall & Oates, eat your heart out!


Ninja Ropes
There are a number of mentions of Ninja Ropes throughout. In fact, there's an entire ode to the iPhone/iPod Touch game. Go see what they're talking about and play it yourself at http://www.sarkscape.com/games/iphone/ninja-ropes-extreme/

Easter Eggs
They'd lose their nerd cred if they didn't pack the disc with Easter Eggs.
I didn't uncover all of these myself, but I did spend a few hours figuring a couple out.
One of my favorites starts in the "Wiccan" subtitles: they give you a number, 9780793529865, which, with some web searching and attention to the special features, will get you an Easter Egg.
But on to the spoilers!

Joss playing Captain Hammer:
At the beginning of Chapter 6 (Act 2) in the regular movie, hit ENTER on your remote. This will trigger an Evil League of Evil countdown. During the countdown, hit 5.

Outtakes:
From the Scene Selection, choose "Moist Dries Up." During the countdown, hit 6.

Supposedly, there's a few more - check the discussion over at DoctorHorrible.net.