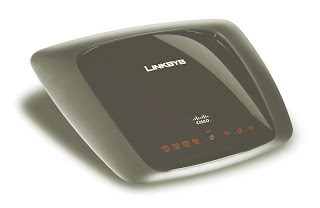 During the last big electrical storm, one of the ports on my Linksys BEFSR41 Etherfast Cable/DSL Router died. Since that's the router at the center of the "office" zone of my home network, that was an issue...

I figured it was time to retire the Linksys WAP11 wifi access point as well, so I picked up a Linksys WRT310N Wireless-N Gigabit Router to kill two birds with one stone.

I must say, we were off to a rocky start. When I get a new router, I pull out the manual and study up the night before installation so I can plan cable and network routing. No actual manual in the box. Just a CD-ROM and a sheet saying "run the CD-ROM."

Reconfigure my workstation for DHCP, and pull up the interface at it the default address of 192.168.1.1
Success! I can access with the old standby default "admin" password.

Change the config to static IP and... boom! Interrupted network connection.
I fiddled around with assorted settings on the computer end of things, but just couldn't get past it. No information online about this issue. (I assume most people are running DHCP upstream)

So, in an act of desperation, I boot up a (Mac) laptop, and try again from there.
Everything works fine.

I spent an extra hour getting this device set up.
But I must say, so far the actual performance has been outstanding. The wifi connection has been screaming fast and rock-solid. MUCH better range than the old Access Point. The DMZ routing has been working fine, and I was able to replicate my old network configuration.

Overall, I'm very happy with the purchase. Mac users need to be aware that the CD is a coaster for them. If you're familiar with previous Linksys consumer routers, then this one should be easy to set up.


I don't know if the configuration issue was mac-related (I'm assuming not), but if you plan to get one of these and configure it using the web interface, make sure you have a wifi-enabled computer with IE6+ or Firefox on it.