I've been working like crazy this week with little time for TV. I DID tune into MSNBC's Democratic Convention coverage in the wee hours.

What fun!
Put a bunch of egomaniacal blowhards (A.K.A. "pundits") in a room, keep them on the air for for days without sleep and watch the sparks fly.

Not enough of this on YouTube! But here's a snippet: 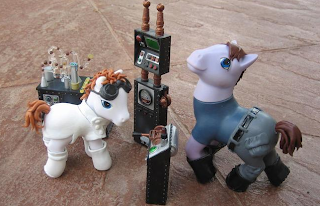 Surreal?
Terrifying?
Has this all gone too far?
Maybe this whole Internet thing wasn't a good idea...

See the whole collection at http://www.requiemart.com/gallery2/main.php?g2_view=core.ShowItem&g2_itemId=6124

So while driving today, I saw a car with a rear window ad. It was colorful and presumably informative. Sorry, I don't have a pic - camera was in the trunk. But it was full-coverage white background like those from http://www.infowindow.com/.

It had the phone number in large black type. Good.
Company name was in 3 colors, as was the URL.
There was also an eye-catching graphic in the design.
Would have made a terrific business card.

As a window ad or billboard design it was useless:

Idiocy in the Newsroom. It's All About the Conventions, Baby!

CNN's latest poll shows the Obama and McCain tied.
First, I have huge issues with the poll: "1,023 adult Americans questioned by telephone." Really?
Although the pollsters insist that new communications technology doesn't skew their already questionable data, they really aren't counting the related behavioral shifts.
The cell-based people I know under 30 do not answer the phone for unidentified numbers. MUCH more willing to read an unknown SMS, though.

But assuming the polls are correct, CNN's analysis (and other reports I've seen on it) are horribly flawed. They all see the change (Obama was ahead in recent polling) coming from Obama's selection of Biden as running mate.


Perhaps way back on Wednesday, when the story was that the US would pull its troops from Iraq, people started thinking more favorably about the incumbent party? Maybe that could have something to do with it?

I understand where this is coming from. Every political reporter on the planet is covering the conventions, and they are locked in that world for the next two weeks. But really, they should at least try to remember there is a larger world out there.

Technorati Tags: polls, politics, conventions
Posted by Unknown at 8:39 AM No comments:

One of my fellow Horrible fans called to ask if I could tell what was on the bookshelf in Act2 @ 12:38.

We determined that Billy is a Harry Potter Fan. 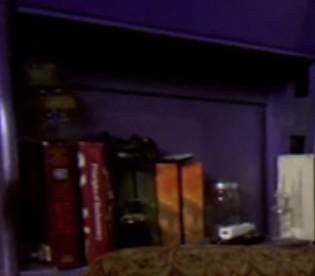 What do YOU see in this inkblot?


* UPDATE * Aug 22 2:30
According to the folks over at LibraryThing, the first book is James S. Walker's Physics, and the second is Albert L. Lehninger's Principles of Biochemistry.

Oh man...
The Bad Horse phone call song is stuck in my head.
I haven't had a song burned into my brain this bad since The The's "True Happiness This Way Lies."

He saw the operation
You tried to pull today.

But your humiliation
Means he still votes "neigh."

And now assassination
Is just the only way.

There will be blood.
It might be yours.
So go kill someone.
Signed, Bad Horse

I now have the ringtone on my phone. Just like Dr. Horrible!

If you have problems getting ringtones onto your Verizon Samsung phone, you can try the method I used.

The site of the MIDI files has a number of transcriptions and MIDI files. Moses Lei has done an outstanding job getting the fans unofficial versions of sheet music and MIDI files.

Of course, we'll all pay for the official versions when they come out.

Now I know where the backing tracks are coming from for all those fan-generated videos...

Google Calendar in Your Apple iCal!

On July 28, 2008 Google announced support for CalDEV. This means you can securely sync your Apple iCal and Google Calendars.

The process is pretty straightforward.
Basically, add an account to iCal and enter your Google credentials.
They say the initial sync takes "five to seven minutes" but it was more like 4 seconds for me.

The system still has some kinks.
Google has list of known issues: http://www.google.com/support/calendar/bin/answer.py?answer=99360

I was making an update to PHP site today: the podcast feed had quit working.
Turns out there was broken markup and all kinds of special characters in the content.
So I created a bunch of filters to scrub the content before sticking it in the podcast.
One of these converted a bunch of diacriticals to plain ASCII. I had the actual characters in the code, so when I went to save the file, my editor warned me about encoding and offered to set it to UTF-8.
All good. Saved away and started debugging the new code.
Then I got "PHP Warning: Cannot modify header information - headers already sent by (..."
I was stumped for a bit since my header statement was on the 1st line of the program.

After confirming nothing funky was going on with Apache or my php.ini, I remembered the encoding change.

My editor had set the encoding to "UTF-8 BOM."

BOM in this case means Byte Order Mark. It adds a few bytes to the beginning of the file which act as a signature to indicate the encoding and byte order for Unicode characters.
You generally won't see those extra bytes, because a "smart" editor won't display them.
But they are there and messing up the PHP file.

The solution in my case was trivial: just change the encoding type in the pop-up menu to "UTF-8 (no BOM)"

I know... You're thinking: "sucky fan art? Lon - don't bother me with this crap."
But these are Whedon fans... I found at least half of this stuff watchable and entertaining.


The good: Rating system for videos. Generally good videos.
The horrible: The "blog" is just the video posts. Forums aren't seeing much action yet.

Tasty treat for fans of Firefly:

Alan chats with Nate about his many projects including Dr. Horrible's Singalong Blog. They have short reminiscence about Firefly. Couple of cool guys hamming it up for the camera :)

Today's woot (http://woot.com) is a nice refurbished TV. A friend of mine wanted to k

now just how much bigger than his current TV this new one would be.

So I started in on the math... Said "surely someone has done this online!"

And, of course, someone has: TV Aspect Ratio Calculator

You can also download a nice spreadsheet from CarltonBale.com. This also includes viewing distance.


Technorati Tags: TV, television, woot, aspect+ratio
Posted by Unknown at 10:14 AM No comments:

Hulu is now offering Dr. Horrible's Singalong Blog for free with limited commercial interruptions. And since it's Hulu, I can embed it right here.

G4 Catches Up with Dr. Horrible

In the 90's my Big Rant involved how ridiculous it was that every business person's desk in America had a 30-pound chunk of glass on it. Eating up desktop space and energy.
Here in the new century, that problem's mostly gone, thank goodness. 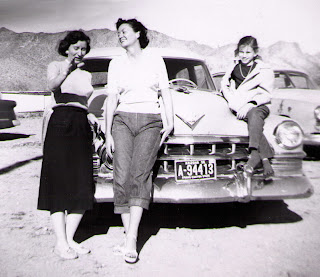 The Big Rant this decade is cars.

Ask someone if they'd mind taking a ton of steel home with them from work tonight. And bring it back to work tomorrow. After they point how ridiculous that request is, point out that they're going to do it anyway.
Why should I move a ton of steel to pick up a burger?
If you think about, modern cars and trucks are amazingly efficient - they get the gas mileage and performance they do while carrying thousands of pounds of steel around.

We have many alternatives. We are wasting an obscene amount of energy hauling this much stuff around.


Photo Courtesy FreeParking
Posted by Unknown at 12:09 PM No comments:

I was raised in a Lawrence Welk and Hee-Haw household. When I encountered the Theme from Shaft, it, well, changed my perceptions of what music could be. Nothing against The Sons of the Pioneers, but Isaac Hayes was just a bit cooler! 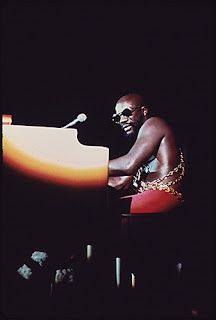 I don't remember where I first heard the Theme from Shaft. I DO remember going into a record store and buying a 45 RPM single with my own money. The record had been out a few year already, so it didn't break the piggy bank.

I literally wore that record out over the course of a few months.

When I heard the news of Isaac Hayes's death yesterday, I was stunned. Another formative figure from my youth has passed.


Mr. Hayes:
I cannot overstate your influence to me and to American pop music.
You and your music are loved.
Farewell, cat!
Posted by Unknown at 8:32 AM No comments:

Email ThisBlogThis!Share to TwitterShare to FacebookShare to Pinterest
Labels: Music

Flying Disc of Your Dreams

The Discraft Ultra-Star is the standard Ultimate disc.
Team Johnny Bravo is one of the top Ultimate teams - and they have a darned cool logo.

Get your very own Johnny Bravo Ultra-Star from Wright Life
Posted by Unknown at 7:07 PM No comments:

Email ThisBlogThis!Share to TwitterShare to FacebookShare to Pinterest
Labels: Toys

Or look at the code if you must:

I maintain two offices: the home office, which is based around a desktop machine with extreme quantities of storage. At the other office, I use my laptop. Because of this, I have a ton of USB devices on a hub, so I only have a few connections to make when I hook up in the morning.

Specifically, I've got three audio devices. Switching between my voice-recognition headset, monitors, and my headphones required a trip to the System Preferences panel.

A little research led me to SoundSource by Rogue Amoeba.

This outstanding extension puts a control on your menu bar that allows you quickly switch audio intputs/outputs and independently adjust volumes.

Yay!
Now I don't need to lend out my iPod every day.
You can watch Dr. Horrible's Singalong Blog over on MySpace with commercials.


http://vids.myspace.com/index.cfm?fuseaction=vids.individual&VideoID=39532032
Posted by Unknown at 12:05 PM No comments: